Not many people are willing to give in to the power of the Hallyu wave, and those who haven’t have been drenched by the waters of all things Korean and may find it difficult to wallow into the idol-infested waters. It’s understandable to not want to be a part of the mushiness or overreactions of Korean dramas and to not want to scrutinize the K-pop idols closely. But then there is Running Man.

I’ve been given the opportunity here to try and win over fans for Running Man. As a huge fan myself, it brings me no greater pleasure than to see more and more people tuning in to the show and getting addicted to it, like I did a year and a half ago. A fantastic show like Running Man should be able to attract everyone, and here are 10 reasons why you should be watching Running Man (if you aren’t already).

#10 It is funny
Make no mistake. The foremost reason Running Man is one of the top variety shows in the world is because the show is hilarious. Almost every single element in the show will get you in to fits of giggles and bellows of laughter. Don’t believe me? Watch it for yourself.

Running Man is the first variety show to implement the nametag ripping game, and nametag ripping is a way of elimination. While it may seem quite simple at first watch, you’ll soon discover that nametag ripping has its own thrills, and your hand may even itch to try rip off someone else’s nametag as well. #truestoryy

#8 World renowned guests
Jackie Chan, Big Bang, BoA, Patrice Evra, Park Ji-sung, SNSD (Girls Generation) and many more other global stars count among the celebrities who have competed with the Running Man members, throughout the course of its run. With so many big names appearing, Running Man also doubles as somewhat of a celebrity variety show.

#7 Interesting games
Running Man has a lot of games, some of which are absolutely hilarious. Creatively thought out and carefully organized to fit the Running Man criterion of balancing humour and victory, these games form the crux of every episode. While the games are primarily played to decide a winner, the Running Man members keep it as funny as they possibly can. Winning is not everything, but the spirit of variety must prevail in the end.

Running Man boasts an impressive display of different locations, from museums to discovery centres and even the City Hall, crisscrossing famous landmarks all around South Korea. It is also a widely-travelled variety show, having also done overseas special episodes in Bangkok, Beijing, Hong Kong, Macau, Shanghai and Vietnam to the joy of their legions of fans. It’s like a travelogue, with a lot of laughs.

#5 The members
The Running Man members; members; Yoo Jae-suk, Ji Suk-jin, HaHa, Kim Jong-kook, Gary, Lee Kwang-soo and Song Ji-hyo are near irreplaceable at this point. They are equally well loved throughout the world, and a loss of a single member (although this was dismissed as mere rumours) may result in a lot of wailing and gnashing of teeth. If there’s any reason for you to watch the show, it’s for the members and their antics. Each member has a uniquely developed character that loyal followers have come to love through the entirety of the episodes. It’s not too late to start now.

Running Man is one of those shows which employ a variety of themes throughout. Boasting episodes which include gems like the Tru-Gary Show, a Prison Break-like Yoomes Bond special, the Superpower and Reincarnation episodes, and to the more recent Avengers episode, there is literally nothing stopping the Running Man showrunners from coming up with more and more ideas for new episodes week after week.

Aside from the members’ personal characters on the show, they have also developed relationships, which have endeared them to fans. The Monday Couple is a perfect example of this, but the others like SpartAce, Easy Brother, Betrayal Club etc. have also etched their place in Running Man history. Not only that, the Running Man members have been seen to be extremely close to one another off camera as well, proving that their 3 year relationship has blossomed from awkward strangers to something akin to a family. 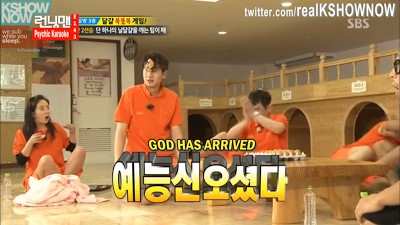 While he was a shy and mild mannered person when he first debuted on Running Man, the Giraffe has since taken on many roles; from the betrayer to the Icon of Misfortune. It works out fine for all of us viewers because Kwang-soo’s variety spirit is getting stronger by the episodes, and that can only mean a lot of laughs.

I hope that this is enough reason for you to go watch Running Man (if you haven’t already begun) or that it has strengthened your love for the show as a whole. Leave a comment below for a future Running Monday’s post that you would like to read.