Taking a strenuous hike through the Port Dickson hinterland, this writer decided to make his way to a popular local attraction, the Cape Rachado lighthouse. This pretty 19th century British structure is accessible only on foot, surrounded by a quiet forest reserve, and untouched by much development. As I made my way up to the lighthouse I passed a little sign. 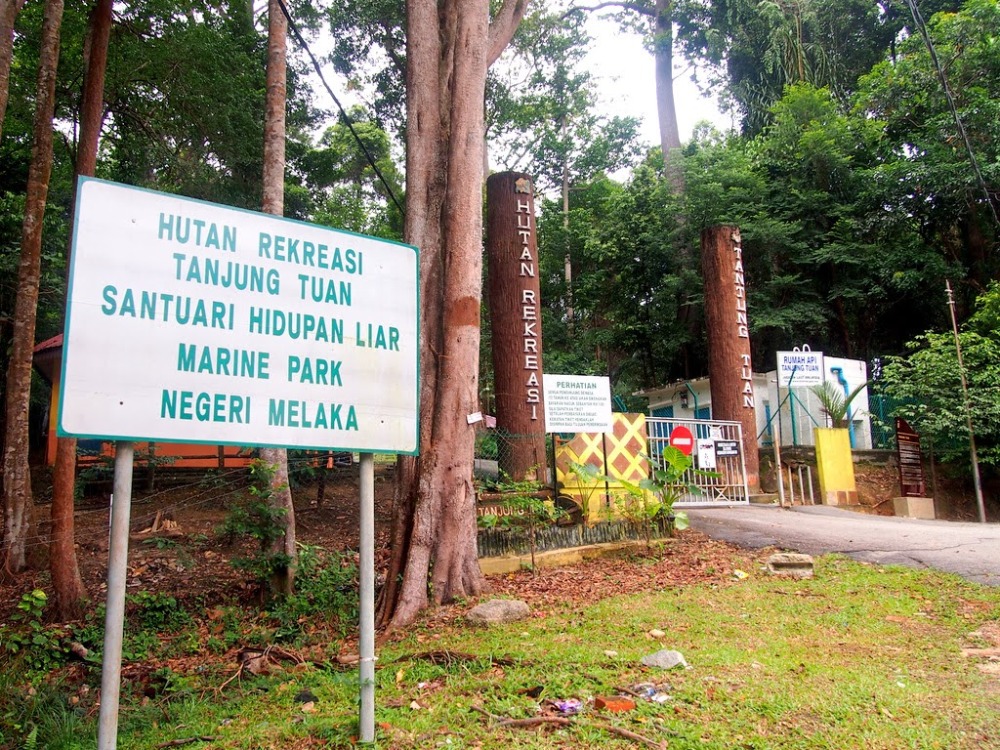 There are two problems with this story. The first of them is that this writer is usually too lazy to hike up the stairs to the BRT, and is more likely to be carried up to this lighthouse than to walk there. That means I’ve made this story up, but that’s just to illustrate the real problem: by road, Malacca is actually twenty kilometres away from here. My heart goes out to the intrepid climbers who hurry on past the gates hoping to get a glimpse of the A’Famosa or cool off with a bowl of chendol at Jonkers Walk. This piece of Malacca is surrounded on three sides by the sea and on one by Port Dickson, which is in a different state, Negeri Sembilan. 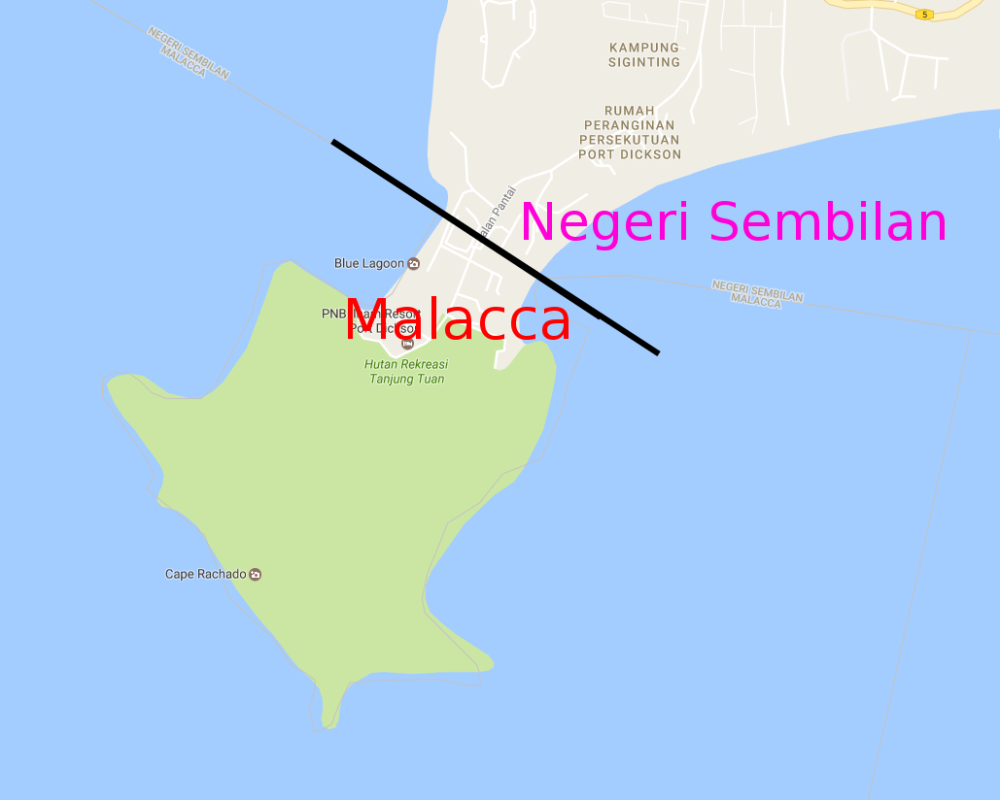 This is the world of enclaves – little bits of one country or state which are surrounded by and separated from the rest of their motherland by other countries in between, apparently flung off, like crumbs from a biscuit (sadly, the best analogy I could come up with.). This usually happens for practical reasons, such as Cape Rachado, which the Portuguese added to Malaccan territory in order to build this pretty little lighthouse to guide their ships in to port. When the Dutch took over, they inherited the lighthouse, as did the British after them,. The British Empire being a well-oiled colonial machine, at no point did they think of redrawing the lines once they had a hold of not just Malacca but the rest of Malaya as well. And, having lost their own empire once, Malaccans must be pretty eager to hold onto whatever far-flung outposts they have left.

Mapping conundrums notwithstanding, the people living around Cape Rachado have it pretty easy. There is no real border for any practical purpose – no passport controls or customs or any other such nuisances. The people of the ‘Chitmahals’ on the India-Bangladesh border, however, have had no such luck. Here, around 100,000 people lived in, not one, nor two, but 173 enclaves of both countries, scattered throughout the countryside – and these are not some nameless rocks. They range in size from small fields to the area of some Pacific island-states, each of them separated, sometimes by miles, sometimes by several feet, from the rest of their country. Remember, India and Bangladesh are two independent sovereign countries, with their own borders and passports; moving between these villages was no easy task. Worse, several of the enclaves were actually within other enclaves – thus placing a ridiculous number of three separate borders between the residents and their mainlands.

In the Chitmahals, unfortunately, ridiculous is a relative term. In this part of the world it can only truly apply to the Indian enclave of Dahala Khagrabari, which is as difficult to pronounce as it is to get to. This little patch of Indian territory was the world’s only third-order enclave, because it lay within a part of Bangladesh, which was surrounded by a village belonging to India, which was completely surrounded by the rest of Bangladesh. In simple terms, the village was separated from its local police station by four different international borders. A variety of causes for this mapping mayhem have been cast about. Some say the pieces of territory were exchanged by two maharajas while they played chess; others, that a British officer spilt some ink on the map while he was drawing the borders of independent India (the Brits are always involved somehow). Neither would have been much solace for the impoverished villagers living in these ungoverned, inaccessible territories – though, as one put it, the ring upon ring of border fences ‘at least mean my cows don’t run away.’ 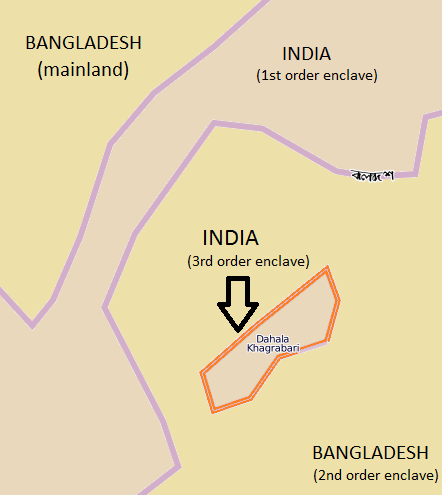 Thankfully for them (and sadly, for this mapping nerd), after nearly 70 years, the two governments agreed to hand over their isolated enclaves to each other in 2015, thus erasing this patch of chaos from the atlas altogether. Some enclaves, however, are kept going purely for amusement. Such is the case of Baarle-Hertog, a town in Belgium – 22 pieces of which are actually in the Netherlands. Its neighbouring Dutch town, Baarle-Nassau, has 7 of its own enclaves within Belgium. Here, though, just like at Cape Rachado, there is no need for alarm, as both countries are apart of the EU, and therefore have no border controls. But that doesn’t make this border any less entertaining. The boundary sometimes runs through living rooms and dinner tables. Before the EU, closing times in the two countries were different, so when the last order was called on the Dutch side of a bar, drinkers would slide over to the Belgian side to keep the liquor flowing. With two countries this friendly, it is a lot of fun to wake up in a Dutch home, step out the front door onto the Belgian soil, and cross the road back into the Netherlands again.

Lest you think our own Malaysia has no more cartographical nonsense to offer, this writer offers you  Tanjong Pagar Railway Station. This was the Singapore end of the Malayan railway, which was all well and good until the Malaysian government ejected Singapore in 1965 – but decided, just in case we changed our minds, to hang on to the Tanjong Pagar station, situated right in the heart of Singapore’s city centre. This made Tanjong Pagar no ordinary railway stop – the entire station became Malaysian territory, effectively an enclave in Singapore. Just to ram this point home, the KTM railway company put up a big sign over the entrance. 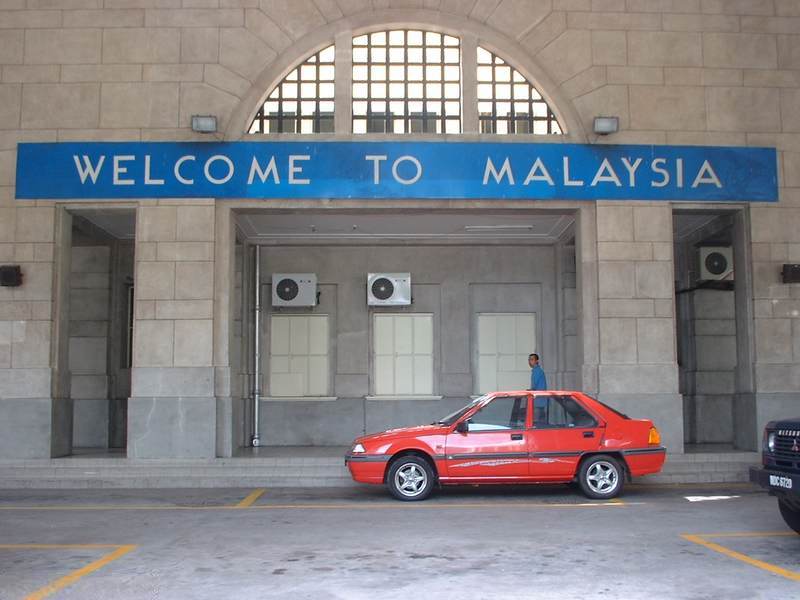 The only Malaysian authorities in Tanjong Pagar, however, were the railway clerks and train drivers – and immigration officials, who were determined to keep the charade going. When Singapore built a new immigration terminal nearer the actual border, Malaysian immigration refused to budge. So, for more than a decade, travellers from Singapore into Malaysia actually passed through Malaysian immigration first, then their Singaporean counterparts at Woodlands. Admittedly, this quirk was not too much of a hassle, but Tanjong Pagar was some valuable real-estate in a land-deprived island country and, probably, a station-sized slap in the face. Eventually, in 2010, the Singaporean government wangled a deal with the Malaysians to hand the station over – and take the sign down.

This writer would be remiss, if, after all this talk of enclaves, he did not mention exclaves as well – which are also separated territories, just not completely surrounded by another country. The list of these is extensive, and, by some definitions, could include Alaska, but definitely counts among them British Gibraltar, French Guiana, and Angolan Cabinda. Exclaves and all kinds of atlas wonders really abound, however, in and around Russia, more than anywhere else. This is a result of Eastern Europe, Russia and Central Asia all once being part of the Soviet Union. The Communists, being egalitarian and democratic etc., divided up their country into various autonomous unit based on ethnicity instead of practicality – with the result that, when the Soviet Union broke up in 1991, a mapping mayhem ensued. There are several parts of Uzbekistan’s Ferghana province which lie within Kyrgyzstan, while across the Aral Sea, 400,000 Azerbaijanis live in autonomous Nakchivan, separated from the rest of Azerbaijan by severely-hostile Armenia. Armenia, too, had its own enclave surrounded by Azerbaijan, but decided to correct the perceived mapping error by invading the country and redrawing the border. Elsewhere, South Ossetia lay in Georgia while North Ossetia was a part of Russia, though the Russians, in 2008, also opted for the “Armenian” option and invaded and annexed the territory anyway.

The most extreme of the enclaves, though, is the city of Kaliningrad. This municipality is bordered by Lithuania and Poland – but belongs to Russia, which lies several hundred miles and three different countries away. The story here is that the city was once a German town called Konigsberg – whose bridges gave Euler (him of the number e) something to think about. When the Soviets invaded Germany toward the end of World War II, they realised the city had a pretty useful deepwater port. So they parceled it away from Germany, and added it to the Russian part of the Soviet Union, which was fine as long as the Soviet Union was around. But when it broke up, and the in-between countries of Lithuania, Belarus, Estonia and Latvia all gained independence, Russia was left with a super-important parcel of territory accessible from the Motherland only by ship. Worse, the neighbouring countries all soon joined the American-led NATO alliance, meaning all chance of holding on to it if things go south has practically disappeared. However, resourceful as ever, since the port is so close to Germany and the rest of Western Europe, the Russian government has recently made some good use of it – by threatening to station nuclear missiles there. 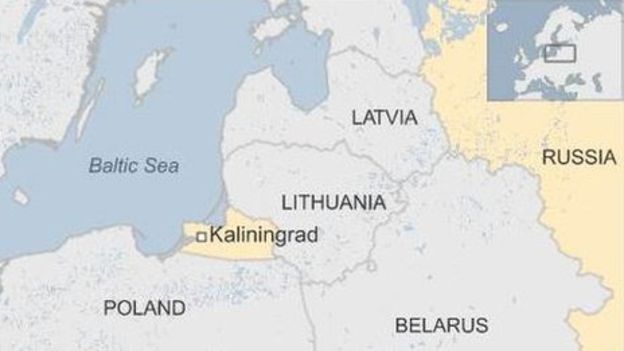 It seems fitting to end our travels back home in Malaysia, though not on our peninsular but across the sea in Borneo – itself a geographic curiousity, since it is the only island in the world divided between three countries, Malaysia, Indonesia and Brunei. The Malaysia-Brunei border, however, has more than this record to distinguish. Malaysian Sarawak was once part of Brunei, but in exchange for their help in ending a rebellion, the Sultan handed over parts of it to the British – and then kept handing over more of his territory in exchange for favours big and small. In fact, he must have been really eager to please, because, in the course of ceding his territories, he gave away so much that he split his own country in two. That, or some underhanded schemes by the British were to blame, which always seems more likely. Whatever the truth, this border catastrophe has carried over into the present-day. Sarawak’s Limbang cuts off one quarter of Brunei from the rest of it. The isolated district of Temburong comprises a quarter of Brunei’s area, but, thanks to the lack access, only has about 2% of the population. All roads to it must pass to through Malaysian territory. But before you feel too smug about this, though, consider that the joke might be on us – because, Brunei being too big to build around, all roads to Limbang from Malaysia have to pass through Brunei, too. 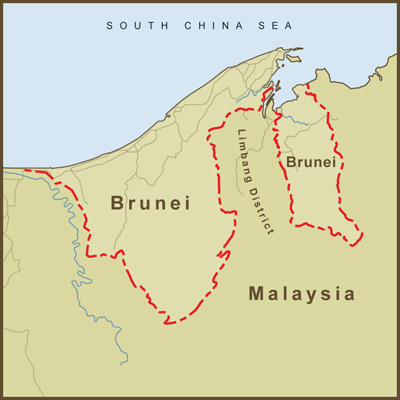