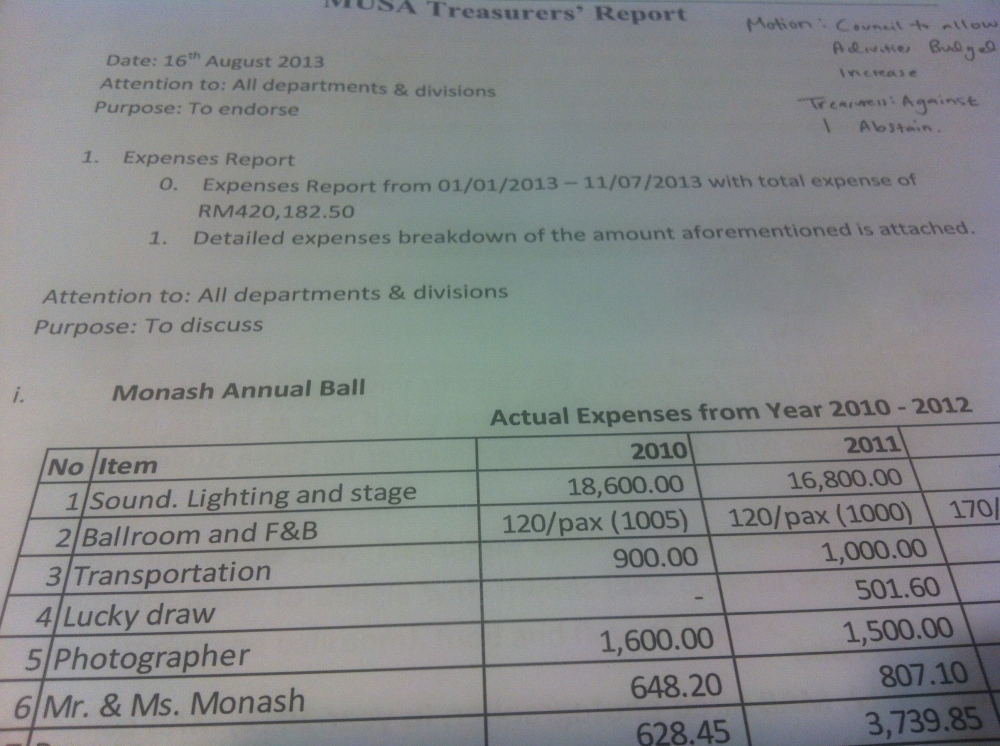 The 6th MSC Meeting began at about 6.42pm on Friday 23rd August with the MUSA President calling on the MCN event organisers and a few members of the current MUISS council to introduce themselves. Both groups were present to give their statements regarding the loss of property, to be mediated in the presence of the Council.

It was also informed to those present that the MSC will not be waiting for the campus administration to confirm the change in name (from Monash University Sunway Campus to Monash University Malaysia) as the wait has dragged out for too long and hampered productions of council name cards and t-shirts, among other things.

The case of the missing kurta, the reason for the presence of the current and ex- MUISS personnel at the meeting, was presented and deliberated over before the council passed the motion that it will be paying for the loss of the kurta first while the council investigates the case further. It was agreed upon that it be settled during the 7th MSC meeting.

Since the Treasurers’ report, as delivered in the pre-meeting business papers, included information that was not to be presented by their department as per meeting decorum, the Activities Chairpersons were called upon to explain their request of budget increment for the Ball preparation. The Ball budget issue was finally resolved as the council passed the motion allowing for budget increment.

The meeting ended at 11.22pm, the longest since the initial 3 day meet at the start of office, and the length has been attributed to the meandering manner of discussions and some confusion on meeting presentation decorum. For a more detailed coverage of the meeting, please visit the MUSA website for the meeting minutes. The 5th MSC Meeting minutes will be uploaded soon.