I just happened to pass by an announcement board when my eyes caught a glimpse of a poster. It was a poster with a white background and a purple-haired girl drawn on it. I was used to scanning posters in my brain, and would leave when nothing caught my interest. But that day, the words “Maou no Café” and the maid dress which the girl wore on the picture immediately drew my attention. From there, I found out that during 13th to 16th August, from 1-4PM a maid café will be held in the Staff Lounge by  the Monash AniManga Otaku Unity and the Monash Boardgaming Club.

Of course, I dreamt it to be a proper maid café ran by waiters and waitresses in French-maid attire. The interior will consist of round wooden tea tables and matching chairs, floral-patterned wallpaper, glass doors and garden windows on my side. Then as we enjoyed our tea consisting of cakes and hot tea to our preference, all of us will enjoy some board games that are available.

The rational side of my head, sadly, quickly pulled me back before I flew too far into the clouds. Putting such expectations on a café jointly ran by two students’ clubs was just unfair and absurd.

I made 2 visits here, first with 2 friends then with 6. When my friends and I entered, we were greeted by colorful paper butterflies which adorned the plain white wall just nicely. While it would have been better if they covered all walls with more butterflies or teru-teru bozu (handmade dolls to prevent bad weather in Japan) or orizuru (paper crane), I respect their efforts in decorating the place. Now that I think of it, too much would have made the venue look like a kindergarten.

A girl in a maid costume came to welcome us and soon we were led to our table. From my place, we could see guys dressed as waiters, complete in white shirts, dark vests and trousers, with matching bowties around their necks. Two girls had the appearance of true-blue French-maids with one of them donning a white apron.

As my eyes landed on the menu, I raised an eyebrow at the sight of the prices. All food and beverages ranged from RM 2.50 to RM 5.00 and we were allowed to play as long as we wished for free. Compared to Meeples where we as non-members must pay RM 5 per hour, this was not a bad deal at all. Adventurous as my usual self in food tasting, I immediately ordered an English Mysterious Tea and Black Sesame Pudding. Since the latter was sold out, I decided to only have the first while my friends had Brownies with Ice Cream. On my second visit, I ordered an Earl Grey, while my other friends ordered various things such as Peppermint Tea, Strawberry Tea, Chocolate Mousse cake, Japanese Chiffon cake, and Toast with Ice Cream.

So, the following below are my thoughts on the food and beverages which I consumed. 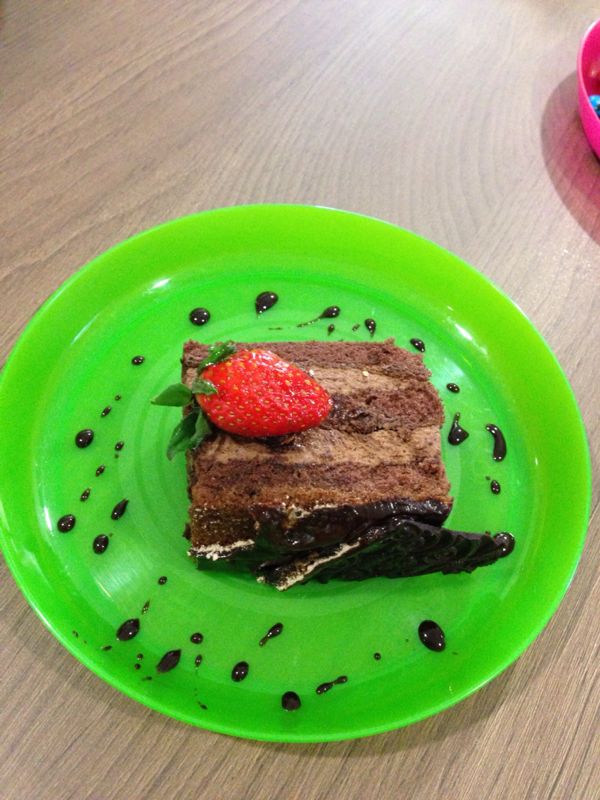 Despite some hardship involved in cutting a piece of toast soaked in ice cream with plastic knife and fork, I salute its creators for being able to give a bright and cheerful feel  with those colourful striped cups, plates, knives and forks. The way the food was presented was also quite tasteful, so they did a nice job there.

The beautiful, elegant colour of the rosella hid the tannic character of the tea in the English Mysterious Tea. As for the Earl Grey, it was quite unsatisfactory in term of fragrance if you compare it to either Twinings or T.W.G., but of course, taste and fragrance will differ between different brands of tea used, despite having the same flavouring. I will not comment on the cakes because they were delicious, but I suspect that they were bought from RT Pastry at SS 15, Subang Jaya (they are my favorites, though!). The brownies were also decent and the ice cream was not bad.

All the drinks I ordered were priced at RM 2.50 with refills, so I cannot complain, and you are allowed to refill. I pretty much agree that a slice of cake being sold at RM 5.00 was fair, so good job there!

Throughout my two visits, I’ve been trying to get a hold of those puddings which were sold out. While it was quite a disappointment, it was nice of the organizers to provide another selection for their customers to choose from. I wish the stock of puddings could be increased, though.

So as you see, it was not that bad, wasn’t it? Now let’s get to the games. There were several board games available and the waiters were ready to give us assistance on how to play each of them. Strategy games were never my forte, so I asked for an easy game.

Dixit and the players

We spent the most time on Dixit, something like a visual guessing game. A player draws a card and they may tell a story or give a hint about it then put that card facing down. The challenge lies in that all players will be required to have a set of only 5 to 6 cards, so they would have to choose their cards wisely!

It was a lot of fun playing it. When my friends put “Dream” as the hint, I purposely put a card of a sleeping girl with a genie to “trap” them. Another friend of mine also put cards with similar themes to the hint, in hopes of trapping others for extra points. My deepest apologies goes to the people who were at the café around 3-4 PM on the last day, especially the guy who sat at same table with us alone, who also left alone.

I didn’t regret my decision to squeeze in time between lectures to visit Maou no Café. The food was nice, the games were fun, and all the waiters and waitresses were polite, helpful, and dressed very nicely. Thank you for all the fun and the beautiful paper couple wearing kimonos which you guys gave to us. Hope to see you guys next semester with other cool events!

The writer (far right) with her friends at Maou no Café