On the 30th of August, Monash University’s Pharmacy Society (MUPhas) had its Hello Buddy Night. Much like Engineering’s Buddy-Buddee Night where juniors and seniors gather to mingle, there was already a large group of people registering themselves when I arrived at the Sports Centre at 6 p.m. I didn’t pay them much attention as I stepped into the venue, which had Ed Sheeran blaring on the speakers and was decked out in fairy lights.

I stood around awkwardly, as every reporter does when covering an event (no? just me? Okay L) until people finally started filing in at 6.20 p.m. Now, the last event I covered was Engineering’s Buddy-Buddee Night in Sem 1 and being in engineering myself, there was one thing that hit me when I finally got a good look at the pharmacy students.

And sooooo pretty as well.

Everyone was really excited, and the selfie picture taking started well before MONGA’s photographers could even begin doing their thing. At 6.30 p.m., emcees Zi Xin and Jung Ho kicked off the night by welcoming everyone and introducing the pharmacy school committee, followed by a brief appreciation speech wishing lecturer Dr.Ong a happy retirement.

Next, the games began with something called ‘Into the Groups’. Basically, the paper cone hat everyone got when they registered had to be worn as a mask, with people being able to see only out of the small hole at the tip of the hat. Everyone was then told to walk around in circles, and had to scramble to get each other into groups when the MCs yelled out ‘Groups of 4!’ or ‘Groups of 10!’. Initially, there was a lot of confusion but eventually people started holding on to each other and walking in circles, making it easier to get into groups.

Now, if you’re as confused about the instructions as I initially was, all you need to know is this – it’s a really good game if you want to ‘accidentally’ bump into your crush, or, if you were one of the limited number of boys there, a really good way to hold many a girl’s hand. Having said this, I did still see one poor guy who ended up holding hands with two guys anyway.

Getting back into groups, Zi Xin and Jung Ho then announced the next game: Strike A Pose. Each team had to ensure that only a specific number of body parts as announced by the organisers fell within a pre-drawn boundary where their group was standing. (That is a bloody long sentence that I hope makes sense – read it again) Commands like ‘3 stomachs’ or ‘4 backs’ flashed across the projector screen as groups scrambled to make sure they had the correct body parts in the box. (Oooh this sentence sounds bad too, abit too murdery) The most interesting one was ‘5 knees, 8 feet, 4 elbows, 5 fingers and 1 left hand’, which almost every group struggled with. 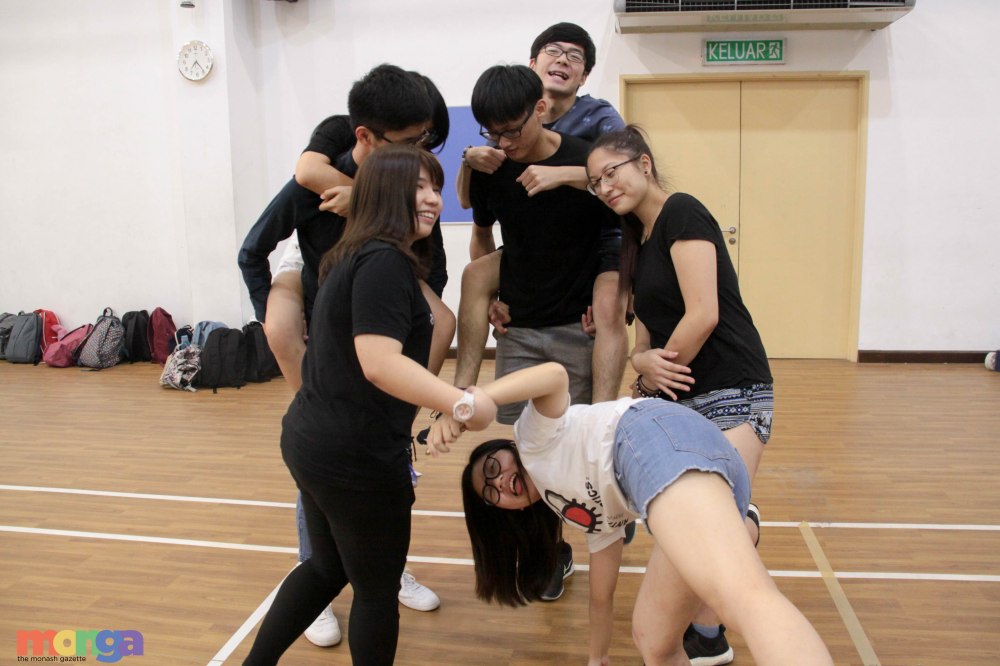 At 7.40 p.m., dinner was served. This was another thing that BLEW my mind. I can’t believe they didn’t keep dinner hostage to prevent people from eating and running. But I guess this is just another testimony of how much everyone wanted to be there. As I stood there stalker staring observing everyone, I noticed that all of them seemed to know each other and were very friendly (I even got a few uncertain smiles my way despite being the weird person hanging around staring at everyone). I found out that apparently invitations for Hello Buddy Night had even been extended to other members of staff including the clerks working at the course management office (CMO), who turned up and looked to be on friendly terms with the students. Now call me a horrible person, but I wouldn’t be able to pick out ANYONE from the CMO even if my life depended on it, so I found it really touching that the pharmacy school is so close-knit.

After dinner was polished off, the final game began: Musical Chairs – In the Dark. Mild though it sounds, this was in my opinion one of the best games played that night as the suspense involved is always fun. Couple that with a dark room and pounding music, you basically have yourself Zouk a great time. The winners of each team were gathered together for one final showdown, where finally one man emerged victorious.

There was no prize.

But that was the beauty of the night though. Everyone seemed to be there to just have a great time with each other. There was never a dull moment, and the atmosphere was always filled with excited chatter and laughter. There was no ceremony after the last game ended, the event was brought to a close with a simple announcement from the emcees thanking everyone for attending. And that was more than enough. Everyone gathered for one last group photo, commemorating what even I as a bystander found to be a thoroughly enjoyable night.